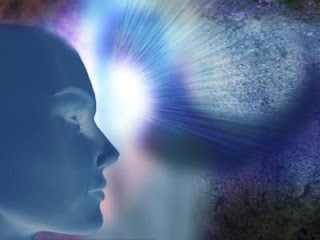 Old traditions of European countries believed that the baby born with a veil over partial or full face was a special child and were gifted with second sight, had enhanced intuitive skills, had psychic abilities, were card readers, aura readers, spirit seers, etc.  The child born with a veil was considered to be destined to do great things. The child was considered lucky.
This same story is echoed throughout the globe as well, with slight variations in the folklore.
This “Veil” is called a Caul. It is the inner membrane of the amniotic sac that a baby is encased inside while in the womb. It is a thin filmy, sort of slimy texture, the same membrane that some animals are still covered in during birth. The baby sometimes doesn’t fully emerge from the sac and is born with the caul covering the head, face, or in really rare times, the entire body which is called a “veiled birth” or “en caul”. In West Africa, a child born completely enclosed in the caul is called Oke.  English countries call the child a caulbearer, or a child born with a veil or hood.
It was common for the caul to be saved as a gift from the birthing assistant to give to the mother for keeps. The caul was saved by keeping it in a jar, or in a sealed envelope. It was either kept in water as it was in the womb, or it was laid out to dry then sealed in an envelope. As time passes, it becomes more imperative to protect it from break down and damage. It is part of the folklore that the state of the caul is linked to the person’s health. The person who kept his caul with him for life would carry on the gift and able to put to use his second sight; he could talk to spirits, etc. If he lost his caul, he would still see spirits but would lose the ability to communicate with them. If the caul is damaged, the person will be ill, but if the caul is firm and in good shape so is his health. Because it was considered lucky to own or possess a caul, in Europe the caul from the baby was saved and created into a good luck charm and sometimes sold to sailors to protect them from the waters of the sea and storms, it gave them protection from drowning. Author Newbell Niles Pucket wrote about this phenomenon and states that Midwives often stole and sold the caul for money because it was such a rare occurrence and considered good luck to own a caul. Many stories tell us about the Caul and its folklore of the baby being born with the gift of second sight. The Grimm brother’s tale “The Devil with the Three Golden Hairs” is about a child born with a veil. Stephen King’s book “The Shining”, Danny is said to be born with a veil at birth, he appeared to have no face. The theme of this story is that Danny has second sight. In “Gypsy: A Musical Fable”, Gypsy Rose Lee is born with a caul. Bruno Frye from Dean Koontz novel “Whispers” is born with a caul. Some famous people born with a caul include Sigmund Freud, Napoleon Bonaparte, Alexander the Great, Liberace, Edwin Thomas Booth, and Lord Byron.
June 16, 2013
Legends Psychic Veil Comments are closed Mama Vescha
← Road Opener Work St. Philomena, Filomena →
Shop